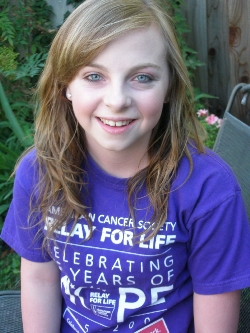 Alex Keir battled cancer personally and now raises funds for cancer research
Hart student Alex Keir devoted a full 24 hours of her summer to walk lap after lap on a running track while she and her supporters raised money for cancer research.
Alex is a two-time cancer survivor, having successfully battled both leukemia and Ewing’s sarcoma, a form of bone cancer. After grueling treatments, Alex is happily cancer-free.
This summer marked Alex’s fourth year to take part in the American Cancer Society’s Relay for Life. The 24-hour event challenges teams to walk continuous laps around a running track to bring awareness to and raise money for cancer research.
“The relay was a huge success,” Alex wrote in her thank you note to supporters. “We ended up walking miles, and we had a great time doing it.”
Alex wasn’t just successful on the track. She was also wildly successful in raising money for cancer research. Alex was the biggest fundraiser at the Pleasanton event, bringing in more than $5,700. That put her top of the pack of individual walkers. All the teams together raised raised more than $83,000 for the American Cancer Society.
Alex’s dedicated team, the Care Bears, included eight walkers and a couple of supporters who brought snacks and water to keep the team energized. Hart students Bonnie Kochan and Mary Alex Roy were among Alex’s friends who joined her for the relay.
The spirited team also won the award for best decorated tent with the cheeky baseball theme of “Save Second Base.” Tent decorations included a baseball diamond, bases, scoreboard and a small second-base player wearing a pink T-shirt, the designated color for breast cancer awareness.
Alex has previously walked three years at the Livermore relay. This is her first year doing the Pleasanton relay, which was held in late July at Pleasanton Middle School.
The 24-hour event includes the emotional survivor lap, a lap for caregivers and the touching luminaria ceremony during which lighted bags are illuminated to “Light the Night.” Each bag has the name of survivors and those who have lost their lives to cancer.
“The Relay for Life is definitely something worth doing, and it helps so many people,” Alex wrote. “We had a great time and are really helping people fighting cancer and their families who also need the support.”
Share your student's story of philanthropy by sending info to harthuskies@me.com.