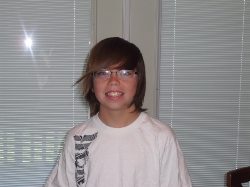 "It's nice to be with other people who know what I have to go through," Angelo said.

Angelo, an 8th-grader, was born with the heart defect tetralogy of Fallot, a cluster of four major defects of the heart. Shortly after birth, Angelo was whisked into surgery to repair his heart. He has endured two more open-heart surgeries since then and faces at least one more in the coming years.

When Angelo's cardiologist told the family about the new Camp Taylor being started six years ago at Camp Arroyo in Livermore, Angelo jumped at the chance to go to a camp where the other kids know exactly what it's like to live with heart disease.

"If I never had this camp, then I wouldn't know anyone with a heart defect," Angelo wrote on his fundraising page. "If this camp went away, I would be heartbroken."

Angelo, 12 (13 in early October), has been going to camp every summer since he was 6 years old. His mom, Skye, said Angelo intends to return to camp every year, eventually applying to be a counselor when he's old enough.

"He just loves it so much," Skye said. "It's the best thing that's ever happened to him."

Camp Taylor is free for all campers, but the grassroots camp needs financial help during these tough economic times. Angelo has benefited so greatly from camp that he decided to do his part to make sure Camp Taylor has enough money to keep going.

Click here to support Angelo and his fundraising efforts for Camp Taylor. Donations are tax deductible.

Angelo has surpassed his initial goal of raising enough money to cover the cost for him attending camp. His new goal of $2,400 will help ensure that other kids can attend camp as well.