Let's Get Ready to Rumble! 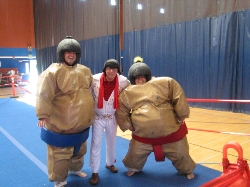 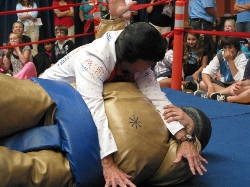 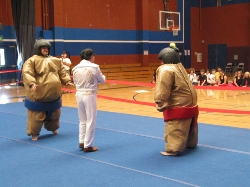 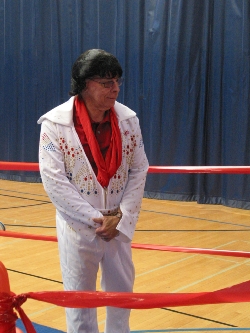 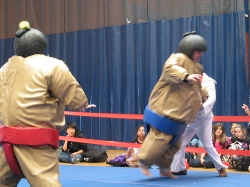 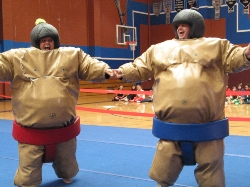 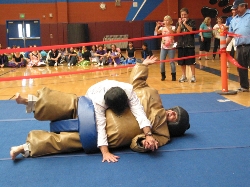 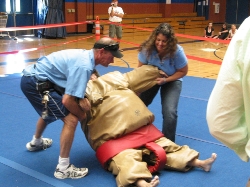 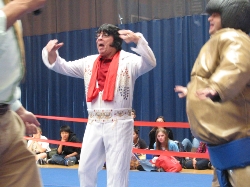 Hart administrators go to the mat to show their appreciation for students
You'd have to venture to Las Vegas after hours to see a spectacle to match the bizarre events that took place in Hart's gym Monday.

Principal Steve Maher kicked off the lunchtime festivities by donning a superbly silly Elvis costume to moderate the day's events. Elvis "Maher" Presley got a helping hand from our over-the-top band director, Dennis Aquilina, to introduce the comical wrestling match.

Vice Principals Terry Conde and Matt Campbell tried their best to look regal as they waddled onto the wrestling mat wearing overstuffed vinyl sumo wrestler outfits. The duo postured for the crowd of giggling, cheering students before they completely set aside their pride to chase each other around the mat and bump their bulbous bellies in what can only be described as the wackiest wrestling match in the history of mankind.

The outrageous sumo wrestlers got so wild and wacky that they ended each wrestling match flat of their backs like helpless turtles. It took teams of assistants to get these goofball wrestlers upright and back on their feet.

The day's laughable events were the administration's way of thanking Hart students for their hard work with this year's magazine drive. Hard-working Hart students pulled in more than $27,000 of much-needed funding for our school.

Special thanks to Vince at 408 Jump in Santa Clara for giving Hart a special discount on the insanely crazy sumo wrestler outfits. We don't even want to know why Mr. Maher owns his own Elvis costume.