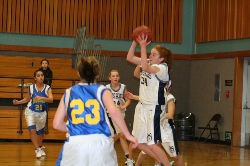 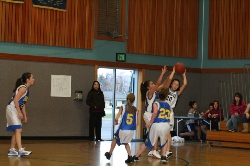 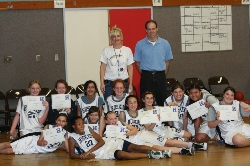 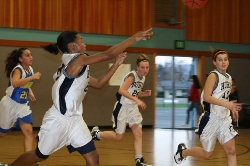 Tri-Valley Athletic League playoffs started Feb. 8 with Hart taking on -- and completely crushing -- Pleasanton Middle School with an awesome score of 41-9. The next day, the Huskies moved on to the semifinals to play against Dublin's Fallon Middle School. The score was a white-hot 52-36, advancing the Huskies to the finals the following day.

The lady Huskies took on Livermore's Christensen Middle School for a nail-biting game to determine the league champion. The Huskies were once again the victors, stomping Christensen with a score of 43-17.

The 8th-grade girls basketball team also had an impressive year that led those players to the league playoffs. The team beat Livermore's East Avenue Middle School in the first playoff game with an impressive score of 26-19.

The 8th-grade girls advanced to the semifinals to take on Livermore's Junction Avenue Middle School in a sizzling game that ended with a thrilling double overtime. Unfortunately, Junction came out on top of this incredible battle with a close score of 37-33.

Congratulations to all the players on both teams for an outstanding season!