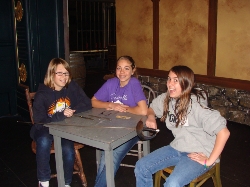 The play is presented through Pleasanton Civic Arts in association with the San Francisco Shakespeare Festival. The play is a dramatic telling of Robert Louis Stevenson's famous novel.

Click here for more info about the play and to buy tickets online. The play starts Friday, April 23 and ends its run with a matinee on Sunday, May 2.