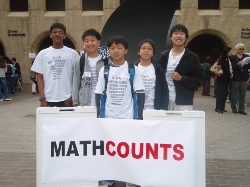 The students are coached by Foothill senior Jeffrey Zhang, who will attend UC Berkeley in the fall to study computer science.

MathCounts is a nationwide program that inspires excellence, confidence and curiosity in middle school students through fun and challenging math programs. Students compete in both written and oral contests as individuals and teams. Think Jeopardy, but with math problems.