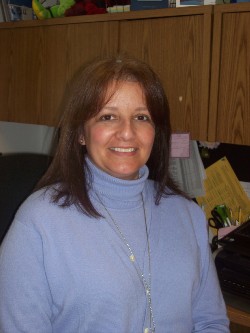 The school district has found a new leader for Hart within the ranks of our very own staff -- Terry Conde.

Vice Principal Conde will take on her new role as principal on July 1 when long-time leader Principal Steve Maher retires.

"I've been on cloud nine today!" Mrs. Conde exclaimed about her new job as principal. "I am truly excited for this opportunity to be part of the best school in Pleasanton."

Mrs. Conde was one of eight candidates for the job, all from within the Pleasanton school district. The field was narrowed to three before she was ultimately chosen for the job, pending the school board's approval.

"I'm very pleased that a lot of the Hart traditions and culture will continue with Mrs. Conde at the helm," Principal Maher said. "Mrs. Conde has a great affection for the community and the students at Hart. I wish her well."

Mrs. Conde also has experience as a vice principal in the Livermore and Fremont school districts and worked as a science teacher in Newark.

"I want to keep Hart on the same path," Mrs. Conde said. "I'll continue the communication we've had with the parents in the community and have the same open-door policy."

Parents are encouraged to meet and chat with Mrs. Conde at the next principal's coffee on Wednesday, April 21 at 10:30 a.m. in the Hart library.