Your Dollars at Work 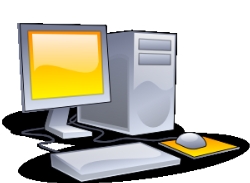 Your donations helped fund 34 new computers at Hart
It seems as if we're always asking Hart families to donate their hard-earned money to keep our school afloat, but we're not always the best at letting folks know how those greatly appreciated donations are spent.

Hart's PFA, funded entirely by parent donations, recently spent about $20,000 to buy 34 state-of-the-art computers for the school's computer lab. The shiny new computers will replace computers that have been in the lab for at least six years. That's about a zillion years in computer time.

"With the new computers coming, we will enjoy better speed, updated programs and the latest operating system," computer teacher Anne Jarmuz said. "Thank you so much, PFA."

The old computers will be used in other classrooms throughout the school.

Special thanks to teacher Anne Jarmuz and parent volunteer Jim Rodgers for working with the district to select and order the computers. We hope the computers arrive and are ready for use before the end of this school year.

Thank you to the many generous Hart families who are so fantastic about supporting Hart's PFA, which in turn funds much-needed supplies and programs at Hart.