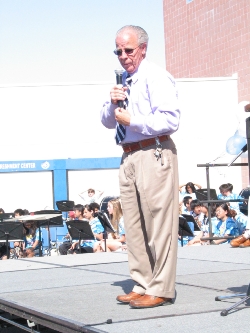 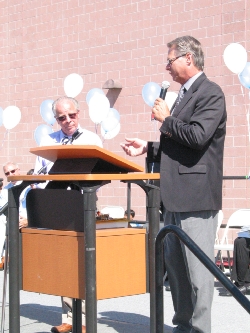 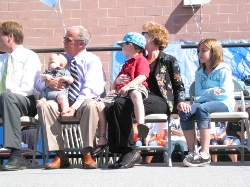 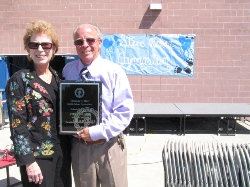 Mr. Maher was clearly touched by the designation in honor not only of his 39 years of service to the Pleasanton school district, but his dedication to Hart's sports teams. Despite his retirement, Mr. Maher will be a common sight on campus as he leads Hart's 7th-grade boys basketball team next year.

The gym announcement was made Monday at a special school assembly honoring Mr. Maher.

"I will miss all of you more than you will every know," Mr. Maher told the cheering crowd. "But I'll tell you right now that I'm not going away. I will always be here for each and every one of you."

There was nary a dry eye in the crowd as students, district leaders and family talked about what an outstanding principal Mr. Maher has been at Hart, leading the school since it first opened in 2000.

It is estimated that Mr. Maher has directly affected the lives of more than 15,000 students in his career with the Pleasanton school district, school board president Chris Grant said.

"Mr. Maher is the Wizard of Pleasanton," Grant said, likening Hart's principal to the powerful and all-knowing Wizard of Oz. As with the wizard, Mr. Maher has led the way for countless students to look inside themselves to find the special skills they need to succeed as students and human beings.

Superintendent John Casey spoke of Mr. Maher's exemplary service to the students and families of Pleasanton.

"We could have named any building after Mr. Maher and it would have made sense -- the library, the science building, the home economics room," Dr. Casey said. "Mr. Maher knows the importance of all of these subjects and these experiences for students."

"But to name the gymnasium after Steve is perfect," Dr. Casey continued. "Mr. Maher knows better than most the importance of a student being connected to school through clubs and sports to do well as a person and to do well as a student in each of the academic disciplines."

Kelly Maher talked about how touching it was to see her father honored by the entire school community.

Hart is extremely fortunate to have had Mr. Maher as our leader for a full decade. We wish him a wonderful retirement, though we look forward to seeing him on campus on a regular basis. Once a Husky, always a Husky!

Special Thanks ... to the handful of Hart parents who pitched in to fund the two personalized plaques designating the Hart gym as being named in honor of Mr. Maher. One plaque will be displayed in the gym, while Mr. Maher has a separate plaque for display in his home. Thanks to these families for funding the plaques -- Soldati, Spivey, Wiley, McCarthy, Richardson, Zatorski, Trevor, Ricci, Angst, Ritter, Brumm, Roeder, Berrigan, (Lynley) Payne, Heidohrn and Francis

PHOTOS from top:
1. Mr. Maher addresses students, staff and parents at his retirement assembly
2. Mr. Maher and wife, Tina, enjoy the Hart band's music with three of their grandkids
3. Superintendent John Casey talks about Mr. Maher's service to Pleasanton
4. Steve and Tina Maher display the plaque that will be displayed in the gym, officially designating the building the Steve Maher Gymnasium