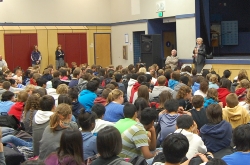 "It was an incredibly moving experience for our students," teacher Jessica Lex said.

Students listened intently as Helen told about growing up in Romania where one third of the population was Jewish. In May of 1944, Helen, her sisters and niece were imprisoned at the Auschwitz, the largest concentration and extermination camp run by the German Nazis.

Helen stayed at Auschwitz until October of that year, when she was relocated to a labor camp outside Puskow. In January of the following year, Helen and other prisoners were forced on a death march that lasted three grueling months before arriving at yet another concentration camp.

Helen remained at the concentration camp for six weeks before once again being forced into another death march. Helen and one of her sisters managed to escape, seeking shelter in the woods with a kind woman and her daughter. After a couple of days in hiding, the daughter helped Helen and her sister cross the border of Czechoslovakia, where they heard of a school where they could hide until the war ended.

Helen's nightmare finally came to an end on May 4, 1945, when the Americans liberated prisoners and others in hiding.

Helen lives in Burlingame with her husband of 65 years, the same man to whom she was engaged when she was first captured. They survived separately during the war and reunited after both were liberated.