Debate of the Century at Hart 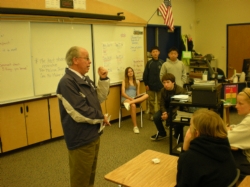 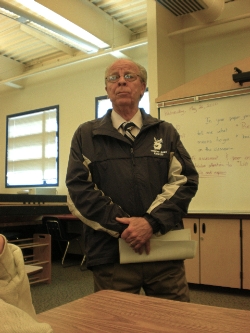 Eighth-grader Melissa Muller fired the first salvo when she flat-out declared “the dress code is too restrictive.”

Melissa drove home her message by pointedly wearing a respectful outfit that was clearly in violation of the dress code, thanks to spaghetti straps and too-short shorts.

“You need to be a leader and learn how to question authority,” Melissa told the audience of mostly students. “The school’s a place for learning, not for how you’ll be judged by the outside world.”

Mr. Maher fired back that “the courts, all the way up to the Supreme Court, have ruled that schools have the right to set dress codes.”

Beyond the rights of administrators versus students, Mr. Maher cited studies that show “that students who have a dress code perform better in school than students who do not.”

Students in Hart’s debate club went up against Mr. Maher on this hot-button issue to end the school year on a high note with such an important debate. The showdown drew a standing-room-only crowd before school on Wednesday, May 26. (The free donuts might have been an additional draw.)

The four students who argued against the need for a dress code are Melissa Muller, Jacob Richey, Ardin Lo and Edward Im.

While the students argued they should be allowed to make their own clothing decisions, Mr. Maher countered that it’s the school’s responsibility to set standards and limits.

“It’s our obligation as a school to set what’s proper and what’s not,” he said, citing the “give ‘em an inch” rule that if standards are too lax, students will push the limits far beyond acceptable attire.

“If you ease up on the dress code, then students take advantage of it,” Maher noted.

“We’re not taking it to extremes,” Melissa argued on behalf of herself and fellow students. “There are different types of attire for different locations. School is a casual location.”

“If you have a dress code that encourages a laissez-faire attitude, then kids won’t be on top of their game,” he said. “My job is to provide a safe learning environment, and it’s been proven that students learn better if there is a dress code.”

Jacob, clearly a red-blooded American boy, agreed that short shorts on girls “can be a bit distracting to guys,” but he argued that the problem extends beyond campus borders to the industry that markets inappropriate clothes to students.

Mr. Maher admitted that he sympathizes with students, especially girls who have a difficult time finding shorts that fit within dress code standards.

“”The manufacturers of clothing take advantage of your youth,” Mr. Maher told the students. “It is very difficult to find something that fits the dress code.”

The idea of requiring students to wear uniforms was floated, but Arlin Lo argued “clothing is a freedom of expression for kids. The world would be boring if everybody had to wear uniforms.”

Mr. Maher noted that the dress code is not set in stone. Eight years ago, students petitioned Mr. Maher to allow them to wear flip-flops to school. The dress code was amended to allow flip-flops, as long as students were not injured by wearing such flimsy footwear. So far, no flip-flop injuries have been reported.

Jacob’s closing argument ended with the statement that “the problem with our dress code is it’s too restrictive.”

The upshot, Mr. Maher said, is that “there will always be a dress code. We have to decide what’s appropriate and what’s not appropriate.”

In the end, a show of hands proved that spectators in the packed classroom were equally divided about whether the dress code is appropriate or too restrictive.

Mr. Maher commended all the students for their hard work with the extracurricular debate club, which just ended its third successful year.

“I’m very impressed by this class,” he said. “You have a chance to dialogue without being disrespectful or rude.”

Special thanks to parent volunteers Kim Muller and Candace Cole, who started Hart’s debate club three years ago and have kept it running ever since. Both parents are moving on to high school next year, so Hart is in dire need of at least one parent volunteer who’d like to take over the debate club. If you’re interested, please contact Mr. Maher to discuss how you can take charge next year.

Congratulations to all the students who have worked so hard over the years to make Hart’s debate club so fun, successful and highly rewarding!

(bottom) Mr. Maher listens to a question at the debate.