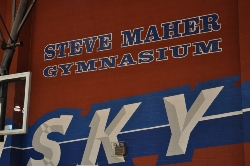 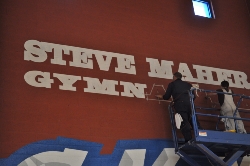 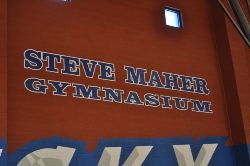 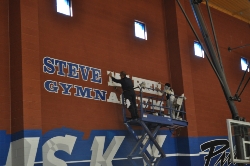 Hart's gym has been painted to reflect its new moniker
It's official: The Hart gym is now the Steve Maher Gymnasium.

The name change was approved by the Pleasanton school board before Mr. Maher retired at the end of the school year, but it took a bit longer to get painters hired to splash the new name in paint on an inside gym wall.

The Hart PFA, using funds donated generously by Hart families, footed the bill to have painters from the Southern California firm of Boss Graphics come to our gym to paint the new moniker. Two painters worked for more than six hours to complete the work. Special thanks to head custodian Alex Sutton for coming in on his day off to supervise the work. Alex's supervision allowed the painters to use a school district lift, saving the PFA a ton of money by not having to rent a lift.

Thanks to the Hart staff members who came up with the brilliant idea of naming the gym after Mr. Maher. They did all the legwork and paperwork to make the Steve Maher Gymnasium a reality.