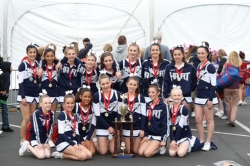 Incredibly, Pleasanton's three middle schools were the top three schools in the competition with Pleasanton Middle School taking the top title and Harvest Park taking third place. All teams qualified for the competition by winning top marks earlier in the year at regional contests.

The Hart cheer team competed in the Small Junior Show Cheer Novice Division against 10 other teams. In the preliminary rounds, the Hart cheerleaders came in first place and had to compete again in the afternoon. The Huskies performed in the finals, but were squeezed out of first place by Alta Sierra Intermediate School from Clovis.

In the Medium Junior Show Cheer Novice division (for teams with 20-24 girls), the Huskies competed alongside Pleasanton and Harvest Park, plus seven other middle schools. All of the Pleasanton schools had outstanding routines, but it was Pleasanton that won first place, followed by Hart and Harvest Park. Pleasanton was also named Grand Champions of the entire event, meaning the team had the highest total score out of all events.

The Huskies were excited to compete with so many superb cheer squads, including the other two Pleasanton middle schools.

If you're interested in being a Hart cheerleader next school year, tryouts will be held after spring break. Watch for details in the newsletter and on the website.