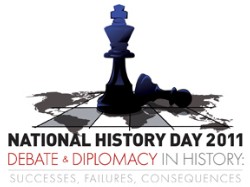 Six students qualify for California History Day competition
Congratulations to the 10 Hart students who competed in the Alameda County History Day on Saturday at the Oakland Museum of California.

Nearly 200 students from 11 schools competed in the event. Hart students who competed are:

Annie, Theresa, Angela, Cameron, Vince and Omeed were all chosen to advance to the state contest on April 29 in San Jose.

Congratulations to all the students who advanced to the county level, and good luck to those who will compete at the state level!