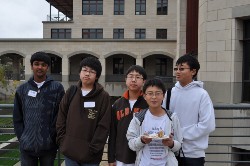 Hart's math team ranked high in state competition
Congratulations to Hart's MathCounts team for scoring a high ranking at the state MathCounts competition held Saturday at Stanford University.
The competition was intense, but Hart managed to squeeze into the top teams list by ranking 12th out of the best and brightest 29 teams in the state. Nathan Zhang, 8th grade, ranked in the top 16 for individuals. The high rankings are an awesome accomplishment for Hart and Nathan.
Hart's official MathCounts team includes Andy Hu, Jeffrey Huai, Yujin Kim and Nathan Zhang. The team's coaches are Foothill students Chris Wen and Akshay Ravikuma. The assistant coach is Kevin Zhuang, also a Foothill student.

MathCounts is a nationwide program that inspires excellence, confidence and curiosity in middle school students through fun and challenging math programs. Students compete in both written and oral contests as individuals and teams. Think Jeopardy, but with math problems.
Congratulations to the team and coaches! And thank you to Hart for giving the students the unique opportunity and full support to be part of MathCounts.