Students to Compete at Global Finals 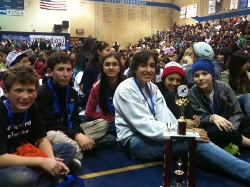 Neha, 8th grade, and Cameron, 6th-grade, are part of a seven-member Pleasanton Independent team that competed in Destination Imagination's state competition held in early April in Oakhurst. The local team won first place in in the science the challenge with their entry, Spinning a Tale. The team now has the opportunity to compete at the global finals in Knoxville, Tennessee, in late May.

Destination Imagination is a non-profit group that encourages students to work in teams to solve mind-bending challenges and present their solutions at tournaments.

Congratulations, Neha and Cameron, and best of luck at the global competition!

PHOTO: Members of the Pleasanton Independent team pose with their state trophy.