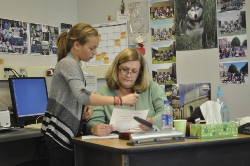 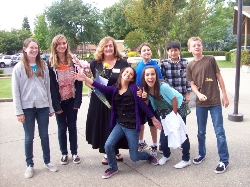 Erin van der Zee never expected to get any special recognition for a job that brightens her days, so she was surprised to learn she’s an Excellence in Education award honoree.

“I was so taken aback, and I was absolutely flattered at the same time,” van der Zee said. “That is truly the emotion I had. I hung up the phone and I went, ‘Wow.’ “

Van der Zee is among 14 school district employees, but the only Hart staff member, to be honored this year with an Excellence in Education award. The awards are given annually by the Pleasaton PTA Council, in conjunction with the school district.

The awards ceremony will be Wednesday, June 1 at 4 p.m. at Trinity Lutheran Church, 1225 Hopyard Road. Everyone is invited to attend. Refreshments will be served.

Van der Zee was nominated for the award by parents of her current and former students. A committee of representatives from each school in the district chose the final honorees.

“I’ve had two older children go through Hart, and I can honestly say, without a doubt, that Mrs. van der Zee has made the fitth-grade to sixth-grade transition the best ever,” Soldati said. “She has an amazing rapport with her students.”

“Mrs. van der Zee truly has a gift that I know she is not aware of,” Soldati continued. “She is unassuming in the way she presents herself and her teaching style that touches so many students and their parents.”

“She teaches in a fun way,” Andrew Soldati added. “She’s understanding, and she listens to you.”

Teaching is a second career for van der Zee, who grew up in Napa Valley and graduated from the University of California, Berkeley with an economics degree. She did fundraising and grant writing for nonprofits before she had kids. She got her teaching credential and master’s in education while she raised three small children.

“I had always known that I wanted to work with young people,” van der Zee said. “My mom is a retired 38-year school teacher, so I was raised in that environment. I knew I could make a difference.”

“When they come to middle school, they’re starting their own little discovery of their lives,” van der Zee said. “All that is very exciting. It’s fun for me to watch this age have a light bulb go off. It’s not always academic. There’s a lot of social maturity that goes along also. I always say to my students to trust themselves. That’s a huge deal. It’s amazing what they can come up with.”

The Excellence is Education award is a great pat on the back, van der Zee admitted.

Van der Zee has 22-year-old twin sons, Jake and Tony, and daughter, Karoline, is a junior at Foothill High School.