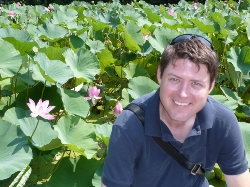 Teacher Tom Domer will take over as Hart's vice principal

Hart’s front office will have a new face, but a familiar one on campus as teacher Tom Domer takes over as the school’s new vice principal.

“I am scared, and I’m kind of sad to be leaving the classroom, but I’m also really excited about the opportunity,” Domer said.

Domer, who officially takes over on July 1, replaces outgoing vice principal Teresa Johnson. Domer will remain in his teaching job as 7th-grade block teacher for the rest of this school year.

Domer is well known on campus, having taught 7th-grade language arts and history for the past five years. He also coordinates Hart’s student mentoring programs that pair students with both student and staff mentors.

When the vice principal position came open, Domer jumped at the chance to make a change.

“My primary goal is to try to work collaboratively with the teachers and staff and get to know more students,” he said. “It’s a great opportunity to get to know every student at the school, not just the kids in one class.”

Principal Terry Conde is thrilled to have Domer moving into the vice principal’s job.

“He brings with him a wealth of middle school experience and a true commitment to student learning and achievement,” Conde said. “I am confident that he will serve our students, staff and Hart families well in the coming year.”

Domer, a Marin County native, got his bachelor’s degree at the University of California, Santa Barbara and has attended both San Francisco State University and St. Mary’s College for graduate work. He’s currently finishing work toward his master’s degree in school administration.

Domer started his career at Hoover Middle School in San Francisco, working there six years before teaching a year in New York and three years at Burbank High School. He started working at Hart in August 2006.

“I wanted to work in a community that really values education,” Domer said of his move from big-city schools to the suburbs. “I had heard a lot of great things about the Pleasanton community and (former principal) Steve Maher and Terry Conde in particular. So I came out and took a look at it and was really impressed with what I saw.”

Middle school is the ideal place to work, according to Domer.

“I love middle school kids because they are starting to become the people that they’re going to be,” he said. “They’re coming up with their own individual personalities and identities that are separate from their parents. That’s a really fun thing to see.”

Domer is eager to expand his influence beyond the classroom to the entire campus.

His style as vice principal is “taking a positive approach to discipline. When a kid has done something inappropriate, I like taking that opportunity to make a positive bond with them and turning it into a growth experience.”

“The bottom line is that he not only is an outstanding teacher, but he has the knowledge and the drive to be an outstanding vice principal,” Conde said. “I am very excited about having Mr. Domer in his new role at Hart. It’s going to work out phenomenally well.”