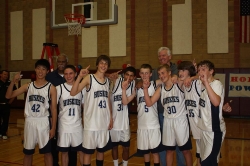 The 8th-grade team was up against crosstown rivals Pleasanton Middle School for the Tri-Valley Athletic League championship title. The Huskies won Thursday's championship game with a final score of 51 to 29.

The 7th-grade boys basketball team came out second in the league standings after losing to formidable opponent Fallon Middle School of Dublin. The final score was Fallon 53, Hart 35.

Hart played a fantastic game against an incredibly tough team. The score was close at halftime, 25 to 19, but the Huskies simply couldn't hold the court against the fierce Fallon players. Everyone on the Hart team played and contributed to a well-played championship battle. The Huskies finished the year with a respectable 10 wins and only two losses.