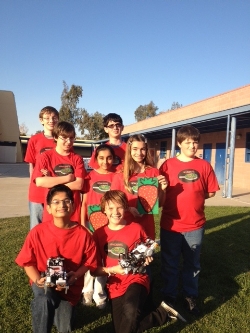 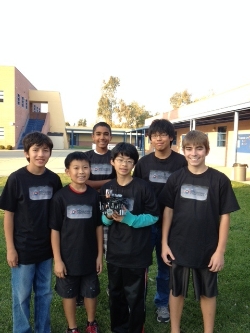 This year's challenge is Food Factor: Keeping Food Safe. Students are challenged each year to work together as a team to come up with solutions for real-world issues. Team Chrome tackled the problem of fish contaminants, while Team Nano Bots searched for alternatives to pesticides on strawberries. Both teams developed robots to help solve their challenges.

Hart's robotics teams presented their challenge solutions at the FIRST LEGO League Qualifying Tournament at Castilleja School in Palo Alto. Both teams did a phenomenal job at the tournament, but only Team Chrome did well enough to advance to the NorCal East Bay Championship Tournament in January.

Both teams are coached by teacher Anne Jarmuz.

Click on the files below for more details about each team's robot and how they solved their challenges.

Congratulations to teams Chrome and Nano Bots for their hard work and outstanding achievements.