Mr. A Takes Pies to Face 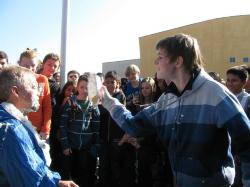 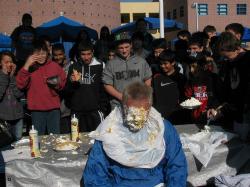 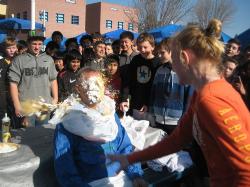 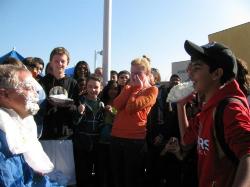 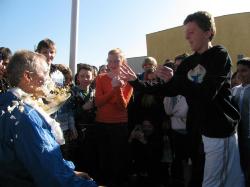 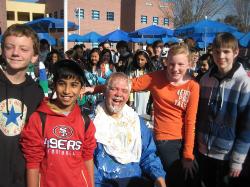 The pie challenge came about in December when students were selling See's candy to raise money for a spring trip to Disneyland. Aquilina, or Mr. A, as he is affectionately known, told his students he'd let each of the top fundraising team hit him in the face with a pie. Students worked in teams to sell candy at local grocery stores and the farmers market.

Fallon Marshall, Faiz Haque, Cameron Monks, Robbie Brumm and Mira Greenlee are the five lucky students who sold the most candy and won the honor of tossing pies at the ever-wacky Mr. A.

Students were thrilled beyond belief as Mr. A took four consecutive pies square to the face. The congenial teacher took it all in stride, making the silly event even more fun for students.

PHOTOS top to bottom
Fallon Marshall tosses the first pie at Mr. A
Mr. A regroups after getting his with the inaugural pie
Faiz Haque has fine pie-throwing form
Robbie Brumm launches the third pie at Mr. A's handsome mug
Cameron Monks gets into his pie toss
The four winning pie tossers celebrate with a messy Mr. A
Photos courtesy of Janeen Rubino Brumm