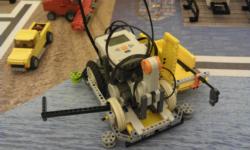 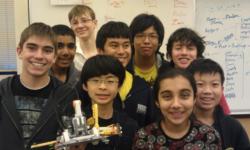 Team Chrome scraped by in last place at a qualifying competition, so the team went into the regionals determined to improve its rankings. It wasn't easym as the 48 best teams from the entire region showed up to compete.

Newark Memorial High School was bustling from the early-morning start of the competition and throughout the entire day as the Northern California East Bay Championship got underway. Each team set up an information booth and practice table. Teams had to present their research project, teamwork strategies and robot design to a panel of judges. Each team also had to compete in four rounds of robot competition under the lights and cameras in the main gym.

After the first round, Team Chrome was in 23rd place. This year's challenge is Food Factor: Keeping Food Safe, so each robot must complete a food-related task, such as shifting groceries, harvesting corn, removing rodents or sterilizing bacteria.

It was the final competition of the season for this region. It was a long long day, but everyone worked together extremely well. Special thanks to all the volunteers, referees, judges and organizers for a fantastic experience. Finally, Team Chrome would like to share its experience with other Hart students interested in robotics, so we are planning some after-school activities. Stay tuned.