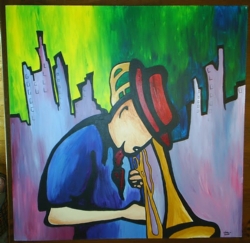 "They are the second Hart trombone section to receive this award," band director Dennis Aquilina said. "Ironically, Laura's older brother, Jeff Buscheck, was in the first outstanding trombone section. Must be in the genes."

The jazz festival on Feb. 11 drew 50 ensembles from 24 Bay Area schools. The annual contest is named in honor of Jim Campana, Amador Valley's music director from 1959 to 1979. The jazz festival is considered a a yearly highlight for many Bay Area jazz groups.