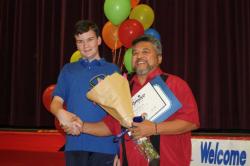 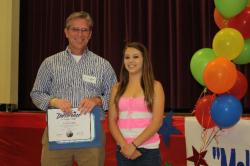 Hart's award honorees are custodian Alex Sutton, teacher Scott Church and cheer coach Nancy Jefferies. Honorees were nominated by students and parents. All honorees were recognized at an awards ceremony in mid-May.

The awards are given annually to celebrate special education youth throughout the Tri-Valley and provide a chance for families to acknowledge individuals who have gone above and beyond to make a difference in children's lives.

Sutton was nominated by parent Janeen Rubino Brumm, whose 8th-grade son, Andrew, has autism and works twice a week as an assistant to Sutton.

"Andrew says Mr. Sutton is funny and kind," Brumm wrote in her nomination letter. "(Andrew's) favorite thing to do with him is all the recycling. Together, they take care of the garbage and recycling on campus. Mr. Sutton even made Andrew his own key to the garbage bin area. That in itself made Andrew feel very important and a real part of the team."

"Mr. Sutton has gone out of his way to empower Andrew and help him know that he really is contributing to Hart as a valuable member of the team," she wrote.

"Mr. Church has helped me with my grades and made this year very fun and less stressful," Karina wrote in her nomination letter. "He has been a very patient and respectful teacher. Through thick and thin, he has always been there. He is a great teacher and knows how to deal with kids by making learning fun."

"Nancy ... (is) not just my coach; she is also my friend and hero," Shauna wrote in her nomination letter. "Whenever I would have any problems, I could go and talk to her. Honestly, she is the best coach I have ever had. I could not thank her enough. At times, she was strict, but it helped. That's why our team was so good. She accepted and was always happy with whatever place we got and was never negative."