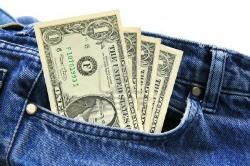 Huskies give back with jean and coin drives
Hart's outstanding students, parents and staff have once again proven how generous they are by wholeheartedly supporting two recent philanthropic endeavors -- Teens for Jeans and Coins for a Cure.

Hart collected an incredible 310 pairs of gently worn jeans to donate to a campaign to help homeless youth. The Teens for Jeans program is sponsored by the Aeropostale clothing store. The jeans Hart collected were dropped off at our local Aeropostale store, which in turn will donate the jeans to local homeless shelters.

There are 1.7 million American teens who are homeless, and the number one item they request from shelters is a pair of jeans.

Students were encouraged to drop coins into collection cups in their advisement classes. Many of the cups were full and some were even stuffed with bills of all denominations.

Marianne Ottaway's class collected the most money, winning a pizza party for the entire class. Ms. Ottaway's students collected an impressive $169.13. Nicole Langer's class was a close second with $141.59, followed by Suzanne's Smith's class with $133.11 and Anne Everton's class with $117.40.

JDRF is a leader in research to find a cure for diabetes and improved treatments for people living with type 1 diabetes. Many current, former and future Huskies live daily with type 1 diabetes, an autoimmune disease for which there is no known cure.

Special thanks to the UNCLE Credit Union for so kindly counting all of our coins and bills, then converting several pounds of change into a manageable donation check. Thanks also to students Kaytki Joshi, Duncan McCarthy and Subhi Balaji for working so hard to count and organize coins and bills.

Thank you to all of the thoughtful Hart families who so generously supported both philanthropic efforts, which were hosted by Hart's leadership and student council students.