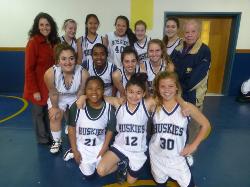 The defensive-minded Huskies held Fallon to a mere two first-quarter points and another two points in the second quarter to take a commanding 15 to 4 lead going into the second half.

The Huskies extended their lead to 27 to 10 at the end of the third quarter as the entire team played the court and continued with the defensive gem. Audrey Goodman led the Huskies with an incredible 14 points and 10 steals.

"I've coached for many years at the high school and the middle school level," Coach Steve Maher said. "While I have enjoyed each and every team, this team stands alone as one of my favorites. They work hard, they enjoy one another, they are polite, respectful and full of energy.  They would request additional practices; not very many teams do that.

"But what sets them apart from all the rest is their character. They are truly outstanding young ladies.  Their parents have done a tremendous job of raising these young adults. They will all be outstanding high school students in the class and wherever their interests take them."

The 8th-grade team beat Harvest Park with a score of 49 to 20 in the first playoff game and then stomped the Pleasanton Panthers with a score of 34 to 26 to make it to the championships.