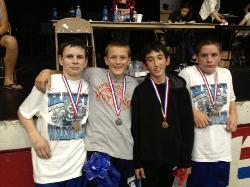 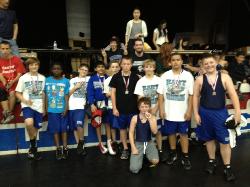 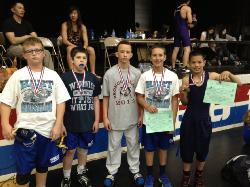 The tournament started with 6th-graders advancing an impressive eight of our 10 wrestlers into the semifinals. After the second round, Hart advanced four wrestlers into the finals and captured two championships with Austin Brum and Elijah Bouchard.

In addition to the champions, Hart had two second-place runner-ups in Carter Pierce and Mason Colwell, one third-place winner in Taylor Hendricks and three in fourth place with Karan Balaji, Jared Sigman and Elijah Blockmon. Peter Taggart and Enzo Yamssi both wrestled well and each won one match to represent Hart. It was a great performance by the 6th-grade Huskies, and the coaches were bursting with pride.

Hart had eight 7th-graders who entered the tournament and got off to a great start with six winning their matches and advancing to the semifinals. After the second round, Hart advanced five wrestlers into the finals and came away with three champions -- Cameron Ghoddoucy, Jake Jackson and Jordan Sequeira. Blake Zimmerman and Dylan Hazen wrestled well in the finals and came away with second-place medals. Luke Szymczak had an exciting third-place match where he came out victorious. Blake Bettencourt and Sharath Sanagavarapu also competed with success in the tournament.

Last but not least, Hart had six 8th-graders in the tournament. After the second round, the Huskies advanced three wrestlers into the finals. Hart came away with one champion in Johnny French, two second-place finalists in Tyler Kline and Arshon Harichi, and one fourth-place winner in Brody Kiehn.  Cyrus Khalilian and Aaron Ensler had some tough matches and wrestled hard.

Overall, it was a great showing for the Hart wrestlers who have been working hard at practices and giving it all that they can at the tournaments. Hart wrestlers won 18 medals out of 24 matches.

Come out and see the Hart wrestling team compete for the Tri-Valley Athletic League championship on March 30 from 9 a.m. to 4 p.m. in Foothill's large gym.