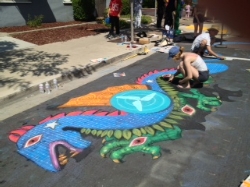 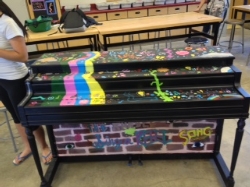 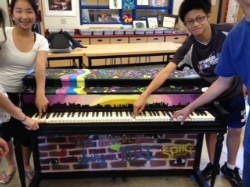 Students decorate piano for festival
Hart's 8th-grade art students decorated one of three pianos that was displayed in downtown Pleasanton as part of last weekend's The Big Draw art festival and fundraiser.

Hart students were hand-picked to decorate one of four pianos that was donated for use at the art festival.

The students "designed their piano after a music video they like," explained Jill Vellinger, board president for the Pleasanton Cultural Arts Council, which hosted the event. "It was a two-dimensional representation of that music video."

The music video that inspired the piano art is Coldplay's Every Teardrop is a Waterfall.

"Art students at Hart worked on the piano before school, during lunch, during art class, after school and on a Sunday to get it finished for the chalk art festival," art teacher Jane Maker said. "It took a lot of effort and collaboration in order to do such a nice job on the piano."

Students at Pleasanton Middle School and the after-school YMCA program at Mohr Elementary School also decorated donated pianos. A fourth piano was left blank when Harvest Park students were unable to decorate it due to a health issue with their teacher.

The four pianos were scattered throughout downtown Pleasanton, rolled into place at midnight on May 3.

The pianos were left for public display and participation through May 14.

"Those pianos were played constantly," Vellinger said. "It was just so cool to see who would sit down and play them. It was a magnet for people to rediscover their love of music and to perform. It was the gift that kept on giving."

The Big Draw was not just a celebration of the arts, but a fundraiser for the council's Arts in the Schools grant program which provides funds for teachers to bring artists into the classroom or take students to performances to expose them to the arts.

Money was raised at the event by selling sponsorships for each chalk drawing and through the sell of artwork created by local artists. The event raised more than $6,000 for art in the schools.

"In addition to giving people a treat for the eyes and letting people get involved if they have that talent for art, we were able to raise money for Arts in the Schools," Vellinger said. "It's becoming more important because the arts funding for the schools at the elementary level is completely gone, except for the band program."