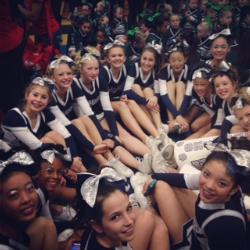 Hart took first place at the competition, followed in second and third place by Willow Glen and Union middle schools, both in San Jose. Pleasanton Middle School took fourth place. Fifth place was a tie between Dublin's Wells and Dartmouth of San Jose.

"It was definitely a close competition, but I am so proud of these girls and their hard work and dedication," Hart cheer coach Kelly Redgrave said. "It's definitely paying off. I am loving my first year of coaching at Hart, not because of the wins, but because of the girls. They are awesome."

Hart previously won first-place honors in November at a regional competition in Union City. The cheerleaders will compete at the USA Nationals at Disneyland, where they'll defend their national title.