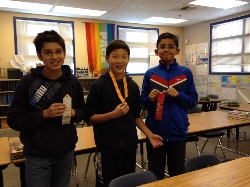 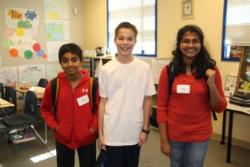 Geography & spelling bee winners
Hart students are such incredible geniuses that the original school competitions for both the geography bee and spelling bee went into overtime and had to be completed at later dates. Way to go, Huskies!

Sixth-grader Warren Xu won the geography be when he correctly answered the question "The Taklimakan Desert, home of the Uyghur [WEE-guhr] people, is located in which Asian country?" The correct answer is China. Warren will take a test to qualify for the state competition this spring, which ultimately leads to the National Geographic Bee.

The last leg of the geography bee lasted seven extra rounds with questions about geographic features of the U.S., questions that used a map of U.S. freshwater withdrawals by state and world and U.S. questions for the championship round.

A huge thank you to spelling bee pronouncer extraordinaire Erin van der Zee and judges Jamie Smith, Sharon Surrena and Mary Geasa. Special thanks to the custodial staff for doing a fabulous job of setting up the multipurpose room for both bee events.