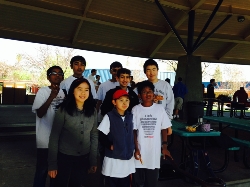 Hart's MathCounts team won second place at the Feb. 22 chapter competition held at Harvest Park Middle School. Only two top teams out of the 18 that competed will advance to the Northern California MathCounts competition March 22 at Stanford University. The only team that beat Hart is Harvest Park.

Congratulations to Hart's math team and best of luck at the state competition.