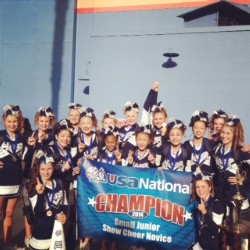 Hart wins national title second year in a row
Congratulations to Hart's outstanding cheerleaders for once again winning a coveted national title at the USA Junior Nationals competition at Disneyland.

Competition was fierce, but the Hart cheerleaders prevailed and won the top trophy for their division.

"These girls worked hard for me all year," coach Kelly Redgrave said. "From the beginning, they had a lot to stand up to from a team that previously won the nationals title. But they had a goal and a vision and they knew it would take a lot if hard work.

"They did it and brought home the national title for a second year in a row. Being an almost brand-new team from last year, they knew this wasn't going to be easy. But with hard work and determination, they did it. I couldn't be more proud, and (they) have made my first year coaching at Hart one to remember."