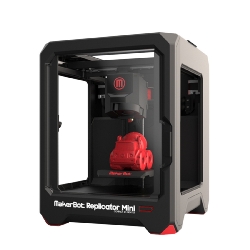 Hart's computer and engineering students will soon create three-dimensional objects they design, thanks to an incredible new 3D printer recently procured by teacher Cheri Weinhagen with a surprise donation from Google.

The computer and digital art teacher has long dreamed of getting a state-of-the-art 3D printer for students, but she had no idea how she'd get funding for the $2,800 device.

"I’ve been wanting to get a 3D printer for the classroom from the first day I was here because I know how powerful they are and the things you can teach with them are amazing," Weinhagen said. "But you know how funding is. I figured the only way I could get one is if somebody paid for it."

Weinhagen will teach Hart's new engineering program for 8th-graders next year offered through the national Project Lead the Way program. Program leaders notified teachers that Autodesk, which has a partnership with MakerBot 3D printers, would fund a set number of 3D printers nationwide – but only if teachers posted a funding request at DonorsChoose.org.

Weinhagen posted her 3D printer request and waited. The free printers were given out before she got one. She did, however, get four donations toward the $2,800 cost of the printer.

"I thought well, I guess I’ll just leave it up there and maybe a few more people will donate," she recalled.

She had no idea when she got to work the other day that exciting news would be waiting in her inbox.

"I had an email that said Google funded all of these projects for Bay Area teachers, and you’re one of them,” she said. “Google just went and funded Bay Area projects in one fell swoop.

“I almost started crying. This is awesome. It’s been weighing on my mind that these parents donated this money and it was just sitting out there. When I opened that e-mail, I thought, wow, this is the best news of the month.”

The brand-new MakerBot 3D printer should arrive on campus in four to six weeks. Weinhagen already has big plans for the new high-tech device.

“We’ve been building and programming robots,” she explained. “There are LEGO robot kits, but you’re really limited with what you can do with LEGO bricks. This will allow (students) to build customized tools that will be task specific.”

A robot that is designed to pick up a basket, for example, may need a specially designed hook to complete that task. A student could design the hook and then make it using the printer, which uses a type of plastic to make 3D models.

Next year, students in the new engineering program will use the printer to make gears and parts for roadsters they’ll design. Students will also use the printer for hydraulic experiments.

“I foresee using it pretty much on a daily basis because the whole class is about building things and designing things,” she said of the new engineering program. “They can actually design and make something on a 3D printer, as opposed to just designing something on a computer. They can really see the results of their design efforts.”

The 3D printers that were once rare due to high pricing are now affordable and being used throughout industry, especially in manufacturing and research and development, Weinhagen said. She predicts the printers will one day be just as common at schools.

“As the price keeps coming down and more schools find more uses for them, pretty soon they’ll be standard,” she said.