Hart Bear in the Military 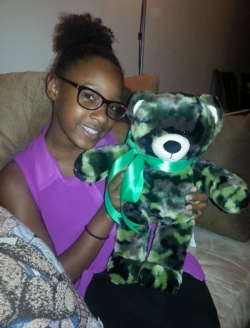 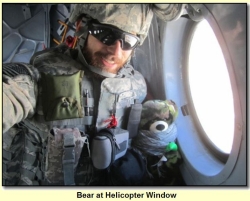 Army Hart may be the most well-traveled bear in the history of teddy bears.

Army is a bear with camouflage fur that was specially stuffed by a Hart Middle School student and sent overseas to soldiers in Afghanistan.

“I really like Build-A-Bear and the troops protect us, so I wanted to give them something that’s meaningful for me,” sixth-grader Zoe Williams explained.

Williams got the idea for Army Hart through her art class, where students send personalized notes and artwork to American soldiers and workers stationed overseas.

“We started by writing a thoughtful note on one side and then drawing a colorful illustration on the other,” art teacher Jane Maker explained of the letter project. “Around Halloween, some of the kids donated candy to send. Soldiers like candy just like other human beings. Then I had some kids start making those really cool rubber band bracelets and sending those. I had one kid make a scorpion necklace because he heard they have scorpions in Afghanistan.”

Williams was thinking about her letter project when she found herself at the mall with her dad. She spotted the camouflage bear in the Build-A-Bear Workshop window and knew right away that she should make a bear for a soldier.

“I was really excited because in Afghanistan, they use camouflage so that nobody could see them,” Williams said of the bear’s special fur. “I thought if they took the camouflage bear on missions with them, they could do that so they wouldn’t be hiding and the bear would be pink.”

Williams was so intent on sending a special bear overseas that she ponied up $40 of her own hard-earned money to foot the bill for the bear.

It’s been nearly four years since Maker’s art class students started writing to soldiers and civilians stationed overseas. Each and every one of Maker’s nearly 600 students each school year takes part.

“I treat it just like a project that they would do in a class so that it’s actually supporting literature,” Maker explained. “They’re beautifully done and very thoughtful. One boy wrote about his dad and his grandpa and how they served in the military. It’s really amazing what you hear in these letters.”

When the project started, students sent letters and art to soldiers only, Maker noted.

“It’s kind of evolved,” she said. “We used to be just strictly soldiers, but now there are other men and women who are doing amazing things to make the world be a better place. There are doctors and people who are over there rebuilding. We address the letters to ‘Dear American Hero.’ “

Students sign letters with their first names only to protect their identities. Students are thrilled when soldiers take time out of their busy schedules to reply. When it came to Army Hart, Williams not only got a reply, but a soldier sent photos of Army out on a mission in Afghanistan.

“It was really exciting when I first got that note,” Williams said. “I didn’t know they were going to write back.”

The soldier, identified only as Brian, wrote, “We will be taking the bear out on mission with us whenever possible and taking pictures of bear doing military things. That bear is by far the best gift I have ever received.”

Williams was tickled pink to see snapshots of Army Hart riding aboard a helicopter with his new soldier friend.

“It makes me feel special because I’m the first one in Mrs. Maker’s class to send a bear over there,” Williams said. “I hope they like it, and I hope Army Hart doesn’t get ripped to pieces. I just wanted to be generous because they’re the ones who protect our country.”