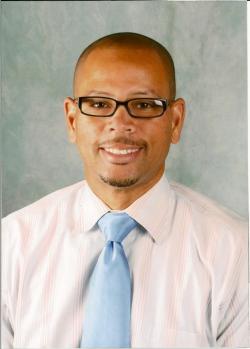 Hart's new vice principal gave up a rising career in banking to follow of passion of being an educator.

Marcel Baker was vice president of a Las Vegas bank when he first got involved with education in 2003 through the group 100 Black Men of America.

“We went into inner-city schools and mentored at-risk youth,” he explained. “I ran a mentoring program at an elementary school for about four years. We had mentoring programs that existed in five schools in the Clark County school district. We were well known in the community for the work that we did with the students.”

In 2004, the group launched an ambitious effort to open the 100 Academy of Excellence charter school.

“I was on the organizing board of directors for that,” he said. “We opened the school in August 2006. The district predicted we might have 150 students. We ended up having 505 students on day one.”

“We were the executive board, so we hired the principal and oversaw the operation of the school,” he said. “I worked with our founding principal on a day-to-day basis.”

The thrill of being in education led Baker to decide on a career change.

Baker enrolled in a graduate program at the University of Nevada, Las Vegas’ education school. He and his family relocated to the Bay Area in 2010 to take a fourth-grade teaching job at an east Oakland elementary school.

He worked through Teach for America to get an alternate license in order to be a teacher. He also got involved with the local chapter of 100 Black Men of America to launch a charter school in Oakland in 2012.

“I would teach during the day and go work on the new school at night,” he recalled.

In 2013, Baker transitioned into administration when he took the assistant principal job at Alliance Academy Middle School in Oakland. While he enjoyed his time there, he jumped at the opportunity to shake up his career with the vice principal job at Hart.

“The challenges that Pleasanton unified are facing are very similar to what urban schools are facing,” he said. “With more Latinos moving into the area and with our English language learners population increasing, we’re faced with the challenge of meeting the needs of those students.”

He earned his administrative credential through the New Leaders organization and is currently working on his master’s degree through Loyola Marymount.

Baker is a native of Des Moines, Iowa, whose family moved to San Jose when he was in high school. He graduated from Cupertino High School and earned his bachelor’s degree in business finance from San Jose State University in 1992.

He and his wife, Teneesha, live in the East Bay with their high school junior son. Their daughter is a freshman at the University of Virginia.

Baker is eager to tackle new challenges at Hart.

“I’m a teacher at heart,” he said. “My passion is helping other teachers improve their practice. There are some good things going on at Hart. As with everything in the world, we can tweak a few things here and there to make it better.”

“I’ve had a very warm reception from the kids and the adults on campus,” he added. “It feels great to be here. The challenges that are in front of me are very familiar to the challenges at the schools that I come from. I’m looking forward to serving the needs of all of our students at Hart.”