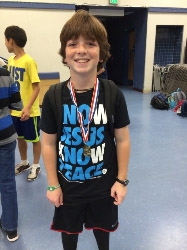 Rohan Gupta wins school competition
Hart students really know their stuff when it comes to challenging spelling words, as evidenced by a nail-biting spelling bee that had to extend into a second unplanned day.

Thirty-two students competed in the school spelling bee that started last Friday and had to be continued to the following Monday.

Rohan will compete in the written semifinal spelling bee at the Lawrence Hall of Science on Feb. 21. If he qualifies at that level, he'll advance to the final spelling bee held at the KPIX studios in San Francisco.