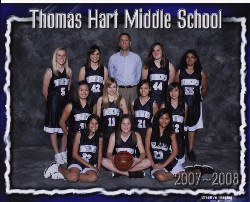 Hart's 8th-grade girls basketball team had an impressive season, taking third place in the Tri-Valley Athletic League.
Hart's 8th-grade girls basketball team finished the season with an impressive 12-4 season.
The team made it to the league playoffs last week. Players got off to a good start with a 40-30 win over . They lost in the second round to 's .
The team played 's to determine the third-place team in the 10-school Tri-Valley Athletic League. The girls flew past Mendenhall with a 40-24 win. The Mendenhall win was especially sweet because the Huskies had lost to that team in the regular season.
"We came back to play a great game in our last game," Coach O.C. Schott boasted. "It was great. The girls did a fantastic job."
Wells and 's took first and second places, respectively.
Team players are:
Kimberly Beaudin
Megan Clark
Madison Craig
Aria Crawford
delos
Bianca Fazio
Katie Mannion
Rachel Orpina
Nicole Ponzini
Kathleen Wagner
Jordan Watterworth
Jessica Woodruff
Congratulations to Coach Schott and the entire team for an outstanding season!
Posted March 1, 2008