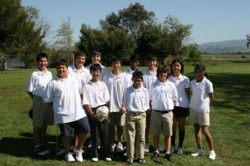 Hart's golf team is off to a strong start this season.
Hart's golf team has already racked up an impressive five wins with only one loss. There are six matches left to play. The wins were against Junction, Livermore Charter, Mendenhall, Stone Valley and East Avenue middle schools. Hart's only loss was to Pleasanton Middle School by a mere two strokes.
The team has a great mix of talent from all grades. Eighth-grade players are Travis Rowney, Roshan Chekuri, Austin Hughes, Evan Chen, Gabe Ballecer and Aditi Jhanwar. Seventh-grade players are Kyle Wiest, Patrick Fracisco, Winky Wong and Teddy Wu. Sixth-grade players are Eric Jeong and Ryan Gronlund.
Travis Rowney has been the low-round leader for the 12-team league for three weeks running. (His scoring average is under par each week.) In the fourth week, Hart had the league low-round leader with Roshan Chekuri and the most individual birdies (three) with Roshan Chekuri. The six-person team also has the lowest team score for the entire league.
Go Huskies!