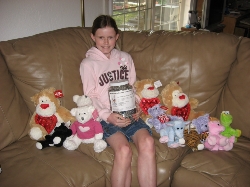 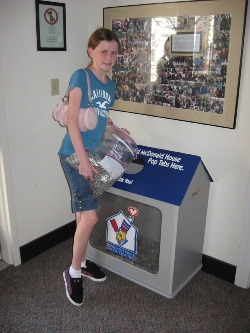 Peggy Duncan gets honorable mention in nationwide Huggable Heroes project.
Helping kids with cancer and other diseases was all Peggy Duncan had in mind when she started collecting soda pop tabs for the Sacramento Ronald McDonald House fundraising drive.
Peggy got the surprise of her life when she found out her grandma, Pat Mahoney, of Alamo, had nominated the 12-year-old for the Build-a-Bear Workshop's Huggable Heroes award.
"I felt kind of excited," a very shy Peggy said about her honorable mention.
Peggy was inspired to start collecting pop tabs last year when she saw a TV feature story about a boy with cancer who collected pop tabs to buy stuffed animals for kids with cancer.
Peggy's parents, Catherine and John Duncan, found out that the Sacramento Ronald McDonald House has a pop tab program to raise money for help pay for families who stay at the house while their kids are in medical treatment.
Peggy started collecting tabs in April 2007. Hart students pitched in this school year when Peggy placed containers for pop tabs all around campus. She collected more than 2.5 pounds of tabs -- quite a feat when you consider each tab weighs a fraction of an ounce.
Peggy and her mom also bought a bunch of stuffed animals on closeout at after-Christmas sales to donate to kids. The family traveled to Sacramento in January so that Peggy could dump her pop tab collection into huge plastic collection bin at the Ronald McDonald House. Her family also donated the stuffed animals.
While Peggy was not chosen to be a Huggable Hero, she was given an honorable mention. She got a fancy certificate and a Build-a-Bear gift card.
"She has a really good heart," mom Catherine said proudly. "She's trying to grow her hair, too, for Locks of Love. She's a generous kid."
It's not too late for Hart students and families to help Peggy in her pop top collection. There are still a couple of collection containers on campus where kids can donate their pop tabs.
Congratulations to Peggy for this exciting honor!