Mr. A Named Teacher of the Year 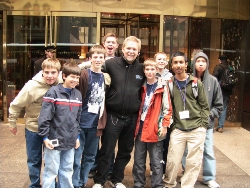 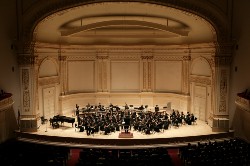 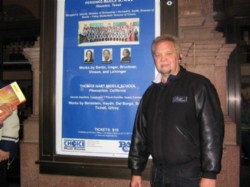 Band director Dennis Aquilina is Pleasanton's 2008 Teacher of the Year
The school district has finally come around to recognizing what Hart families have known for years – that Dennis Aquilina is the best teacher in the world.
OK, so maybe the district didn’t name Mr. A, as his students call him, the best teacher in the world, but he’s been named ’s Teacher of the Year.
“It’s a great honor,” Mr. A said from his cluttered office right off the band room. “I truly share it with the parents and my colleagues. I’m only as good as all the parents who have helped get the program to where it is today.”
Mr. A is Hart’s first-ever Teacher of the Year. He got news of his recognition at a staff meeting earlier this month, followed by the district’s announcement at its annual Salute to Service ceremony for staff.
“We are all very proud of Hart’s first Teacher of the Year,” Principal Steve Maher said.
Mr. A was nominated for the honor by a colleague, whose identity was not revealed, district spokeswoman Myla Grasso said. This year’s eight nominees were reviewed by a committee made of previous teachers of the year.
Mr. A has been Hart’s band and strings director since the school opened in the fall of 2000. He started with the district 13 years ago when he took the band director’s job at .
Prior to joining schools, Mr. A worked in as the band director, where the principal asked Mr. A to start a mariachi band.
“The principal wanted something to draw Mexican families into the school,” Mr. A said. “Those kids were the best. They had never played an instrument. They picked three songs, and we played them over and over again.”
Mr. A defected to just as teachers were posed to strike in a district with the lowest teacher pay in the Bay Area. had the highest pay, plus Mr. A had some teacher friends who bragged about the schools.
When Hart was slated to open, Mr. A jumped at the chance to build a whole new program.
“The cool thing about being here is it was all from scratch,” he said. “I’ve been surprised at what we’ve accomplished here. People can’t believe I took a middle school band to Carnegie Hall.”
Indeed, Mr. A took Hart’s music students to in March to perform at the world famous Carnegie Hall. It was a return to his old stomping grounds and a dream come true for the consummate musician.
“It’s exciting to be able to do that,” he said. “Looking back and reflecting on all of it, it’s pretty wonderful.”
Mr. A is a native who fell in love with when he first visited in the winter of 1979.
“I fell in love with SF and that was it,” he recalled. He packed his bags – including his ever-present trumpet – in 1981 and headed out West. He graduated from .
Before Mr. A became a public school teacher, he led various marching bands and drum & bugle corps. Teaching kids was his true passion.
“I know I have the best job in the world,” he proclaimed. “I get to help kids go further than they think they can. I get to do music all day. I get to be creative. I get to try to inspire kids.”
Mr. A gets no special award or cash bonus for being ’s Teacher of the Year. He will advance to the Alameda County Teacher of the Year competition, but only after completing eight required essays. The county competition is typically held in late October or early November.
“It’s actually very cool because they do a video of each teacher,” Grasso said. “They give each person an award and announce the county winner that night.”
Students know they have to be on their best behavior when Mr. A gets down to business, but they also know he has a lighter side. He’s been known to dress in drag, complete with fishnet hose, a feather boa and fake breasts, for the student-staff basketball game. He also dresses up in an elaborate Tigger costume for Halloween.
“Tigger’s my idol,” Mr. A said. “He has a great outlook on life.”
Mr. A is also known for cooking up a mean batch of pasta sauce. It’s a skill he was forced to learn when he lived alone for the first time ever when he moved to .
“My buddies and I used to have big spaghetti dinners, so I learned how to cook the sauce and make it better,” he said. “I cook it every year for the Hart Beat dinner.”
Mr. A readily admits that he poaches good ideas from the outstanding teachers with whom he’s worked.
“I’ve always been very lucky that I have credible teachers around me,” he said. “I’m like a compilation CD. I’ve taken the best I could from everybody I know and try to put that out there the best I can.
“It takes a lot to make a program good. It’s not just me. I’m really proud that I can represent the school.”
PHOTOS
Top: Mr. A directs the Hart band at Carnegie Hall (Courtesy of Mr. A)
Middle: Mr. A in front of the Carnegie Hall sign announcing Hart's performance (Courtesy of parent Dawn Abbey)
Bottom: Mr. A poses with Hart students in New York City (Courtesy of Dawn Abbey)
Article posted May 22, 2008