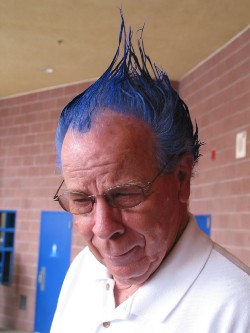 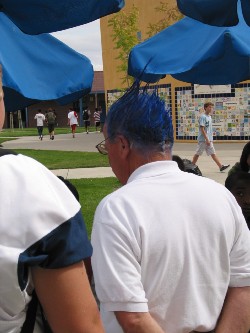 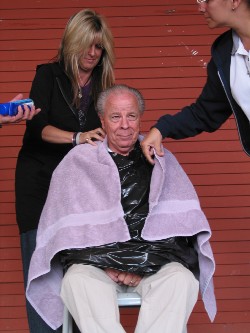 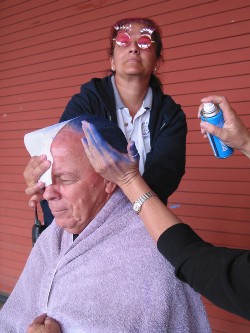 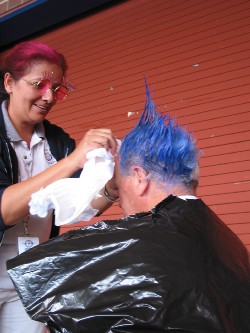 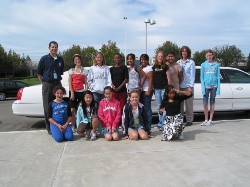 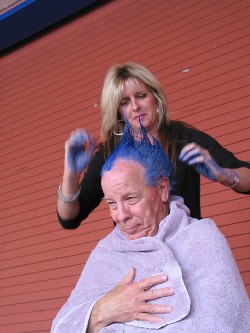 Friday was the big day -- Mr. Maher is blue!
Principal Steve Maher is blue, and he couldn’t be happier.
“It certainly feels odd, but the kids sure love it,” Mr. Maher said of his newly blue-dyed hair. “They want to know if I’ll keep it for the rest of the year.”
Mr. Maher dyed his hair blue Friday during Hart’s two lunch periods. Fifth-period lunch students whooped and hollered as Mr. Maher was swathed in a giant plastic garbage bag to protect his clothes. He shut his eyes tight at counselor Tammy Schoonover sprayed shocking blue dye on his snow white locks.
“They really wanted to see blue hair,” Mr. Maher said of the enthusiastic students. “You have to have a little humor in school. It’s a lot of hard work. Sometimes levity is good.”
In just a few minutes, half of Mr. Maher’s hair was a stunning bright blue and spiked, thanks to Ms. Schoonover’s styling skills. The other half was saved for sixth-period lunch, a decidedly more subdued crowd.
When Mr. Maher’s entire hair was colored a vibrant blue and styled into a wild spike, he mingled among the students. Cell phones were whipped out as students eagerly sought to get a picture of their good-natured principal. Several student jostled to make sure they got their pictures taken with their blue-haired leader.
“I’ve never had my picture taken as much as I did today,” Mr. Maher said. “I’m going to be all over YouTube and MySpace.”
The funky dye job came after students came close to meeting Mr. Maher’s challenge for this year’s magazine drive, a fundraiser that benefits the entire school. Students fell short of the original $66,000 goal, but still managed to sell an impressive $52,000 in products. (Hart gets to keep about half that amount.)
“They really worked hard to raise the money, especially when you consider the state of the economy,” Mr. Maher said.
Vice Principal Terry Conde sprayed much of her hair neon pink. She also wore wacky pink-tinted sunglasses with enormous fake pink eyelashes right on the sunglass rims.
Vice Principal Matt Campbell, the brainchild behind the blue bet, also sprayed much of his hair brilliant blue before heading out for pizza with the winners of the limousine lunch.
Fourteen students who turned in at least 15 orders the first day orders were due were treated to a limousine ride and lunch at Straw Hat Pizza. The outing included drive-by shout-outs at the two other middle schools in town, and .
Students who won the limousine lunch are Megan Akacsos, Lauren Bedard, Marlo Bourland, Mina Corpuz, Peggy Duncan, Kyra Gong, Barbara Hanafee, Juliana Herrera, Gabrielle LaFrank, Ariah Mack, Jessica Meechan, Elena Shingoitawa, Melissa Sur and Lauren Vourhies.
If you missed Mr. Maher’s outlandish hair color on Friday, you’re out of luck. The spray-on color is temporary. It should come out with one good washing.
“If it gives me a little more hair in front, then that’s OK,” Mr. Maher joked.
This isn’t the first time students have seen Mr. Maher pull out the stops to promote school spirit. He’s worn a tuxedo to school and donned an old-fashioned zoot suit at Hart’s annual swing dance competition.
Perhaps the zaniest stunt was when Mr. Maher came to school as Elvis, riding his Harley-Davidson motorcycle. He’s quick to point out that he dressed as the young Elvis, “the Elvis who could still get on a bike,” he said.
When he was principal at Donlon Elementary, he dressed as a Coke can, Mickey Mouse, cheerleader and referee.
“I always tell teachers that to be at middle school, you really have to like the middle school youngsters and the crazy things they like to do,” Mr. Maher said. “Once you plan (a stunt), they look forward to it. They get a real kick out of it.”
“They really worked hard to raise the money,” he added. “They’re pretty awesome.”
Posted
PHOTOS (top to bottom)
Vice Principal Matt Campbell (left) and Janice Murray (second from right), principal's assistant, pose with limousine lunch winners before leaving campus.
Counselor Tammy Schoonover (left) and Vice Principal Terry Conde prepare Mr. Maher for his dye job.
VP Terry Conde looks on as Mr. Maher gets half his hair sprayed a nice hue of blue.
VP Terry Conde does some touch-up work after Mr. Maher's first half-hair styling.
Counselor Tammy Schoonover styles Mr. Maher's hair into a funky spike after all his hair is dyed blue.
Mr. Maher poses with his awesome new 'do.
Mr. Maher mingles with students after the hair-dying excitement.