We Are The Champions! 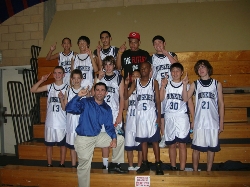 Hart's 8th-grade boys basketball team nabs the Tri-Valley Athletic League Championship
The outstanding hoops skills of Hart's 8th-grade boys basketball players took the red-hot team to the top of the league at Wednesday's final playoff game.
The Huskies beat crosstown rivals, the Harvest Park Patriots, with a winning score of 35 to 21. The game was a defensive battle with a halftime score of Huskies 10, Harvest Park 8. Hart poured it on at the end of the third quarter and start of the fourth, creating a nice point spread that took Hart to the winning score.
The leading scorer was Jeros Domagas with 16 points, followed by Stephen Patrick with 10 points. Matt Lee added 5 and George Curtis had 4.
The Huskies had an incredible 10-2 season and were undefeated in the three post-season playoff games. Huskies rule!
The Huskies plunged into the playoffs Nov. 17 with a game against Livermore's Mendenhall Middle School. Hart players walked away with wide win of 51-27, thanks to a great defensive effort. Players Stephen Patrick and Jeros Domagas led the team in scoring.
Playoffs continued Tuesday when the Huskies took on Livermore's Christensen Middle School and totally crushed the opponent with an incredible score of 59 to 29. This awesome game featured another amazing show by Hart's defensive player. Every single Hart player scored, making this a true team win!
Hart will get another championship banner for the gym, leaving a great legacy for future teams.
Way to go, Huskies!
Click here for wrap-ups of other games.
Posted Nov. 19, 2008