We Are the Champions! 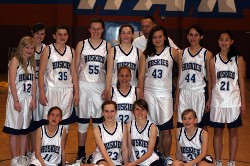 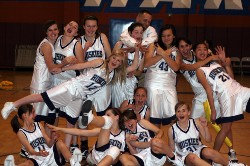 Hart's 8th-grade girls basketball team wins championship, 7th-grade team ranks third
Hart's white-hot 8th-grade girls basketball team nabbed the championshiop Thursday after a breathtaking game against cross-town rival Harvest Park.
The Huskies squeaked by the Patriots with a final score of 25 to 23 to win the 2009 Tri-Valley Athletic League championship.
"This game was everything you want in championship game," Coach O.C. Schott said. "Close, lead changes and great hustle plays made at both ends of the floor by both teams. Harvest Park is a very well-coached team, and they played a tremendous game."
The game wasn't always a sure bet for the undefeated Huskies. The team fell behind by six points with a score of 19 to 13 midway through the second quarter. Hart's tenacious defense didn't allow Harvest Park to score another point until late in the fourth quarter. The halftime score was Harvest Park 19, Hart 17.
While Hart held Harvest Park at bay, the Huskies ran 12 straight points to bring the lead to 25 to 19 with a mere two minutes left in the game. Harvest Park rallied to score some nail-biting points in the last two minutes, pulling the final score to 25 to 23.
t was a frantic last two minutes for both teams, as they were full-court pressing each other and creating turnovers both ways. The game ended with a 20-foot jump shot rattling in and out from a Harvest Park player as the buzzer sounded with Hart winning a thrilling 25-23 victory!
The win capped a perfect 16-0 season for the Huskies. This is the same team that won the 7th-grade championship last year, also with a perfect 16-0 record. The lady Huskies are the first team in recent history to go undefeated in both their 7th- and 8th-grade years, according to league records.
"We talked all year about playing in this kind of game," Schott said. "The players knew that at times, shots may not fall, but that if you play defense in games like this, you always have a chance to win at the end."
"I give the players all the credit," the proud coach said. "They gave everything they had for this team and its success. I will remember them and the way they played forever."
The 7th-grade girls basketball team scored an equally impressive win against Livermore's Junction Avenue Middle School to nab the league's third-place trophy.
The Huskies avenged an earlier season loss to Junction by beating the No. 4 team with an impressive score of 33 to 14. The Huskies led from the first quarter. During one incredible stretch in the third quarter, the Hart girls pulled their lead from five points to an amazing 13 points in the blink of an eye. They kept up the pace to walk away with the victory.
Click here for lists of players on both teams.
Congratulations to both teams for outstanding seasons!
PHOTOS: The 8th-grade team poses after Thursday's championship win.
Photos by Debi Allen