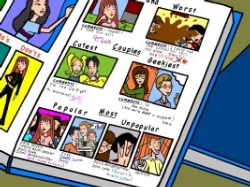 Hart's 2008 Hartbeat yearbook has won several prestigious honors
Hartbeat '08, Hart's yearbook for the 2007-08 school year, has been recognized with three outstanding honors.
The biggest honor is being named a finalist for the 2009 Crown Award given by the Columbia Scholastic Press Association (CSPA). Hart is one of only seven middle schools nationwide to win this prestigious honor for yearbooks. More than 1,770 newspapers, magazines and yearbooks were eligible for the 2009 Crown Awards program. All finalists are guaranteed to win either a silver or gold Crown Award at the national convention.
The Hartbeat '08 also received a gold medal rating with all-Columbian honors from the CSPA. Hart won this award in the area of concept and design. The 15-page critique included these glowing remarks: "You and your staff worked hard to produce a really good middle school publication. It truly looks like middle school students who took the time and effort and pride to show their life and how it revolves around the school."
The National Scholastic Press Association also doled out awards, giving Hart its highest rating of All-American Honor with four marks of distinction in the areas of concept, coverage, design and photography. The 12-page critique included these remarks: "This book is an outstanding middle school publication. The theme concept is carried throughout the book, and therefore, the book reflects the fun of middle school."
Congratulations to yearbook advisor Manja Benadjaoud and the many hard-working Huskies who turned out such an amazing yearbook!