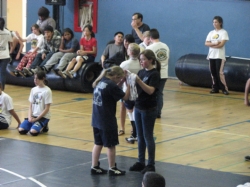 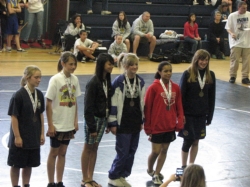 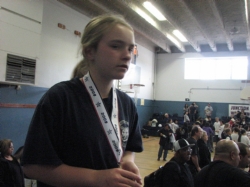 Hart wrestler Bryanna Miller placed at middle school tournament
Hart's sole female wrestler, 8th-grader Bryanna Miller, took home a sixth-place medal at the 5th annual California Girls Middle School State Championship Wrestling Championships.
Nearly 150 girls from across the state took part in the April 11 tournament in Vallejo. There were 79 teams of varying sizes, some with several girls and some, like Hart, with only one wrestler.
Bryanna, who's been wrestling for two years, won her first match at the end of last season and improved greatly this year. At the state tournament, Bryanna garnered the overall ranking of sixth place in her weight category. She also won some matches in dual meets against other schools. Her record was two wins and two losses.
During the regular season, Bryanna won one second-place medal and two third-place medals.
Click here for more info about the tournament, including a list of top wrestlers.
Congratulations to Bryanna for representing Hart so well at state!
PHOTOS (top to bottom)
Bryanna at the state tournament
Bryanna is awarded a medal at state
Bryanna and the other top wrestlers in her group pose with their medals
Photos courtesy of Miller family